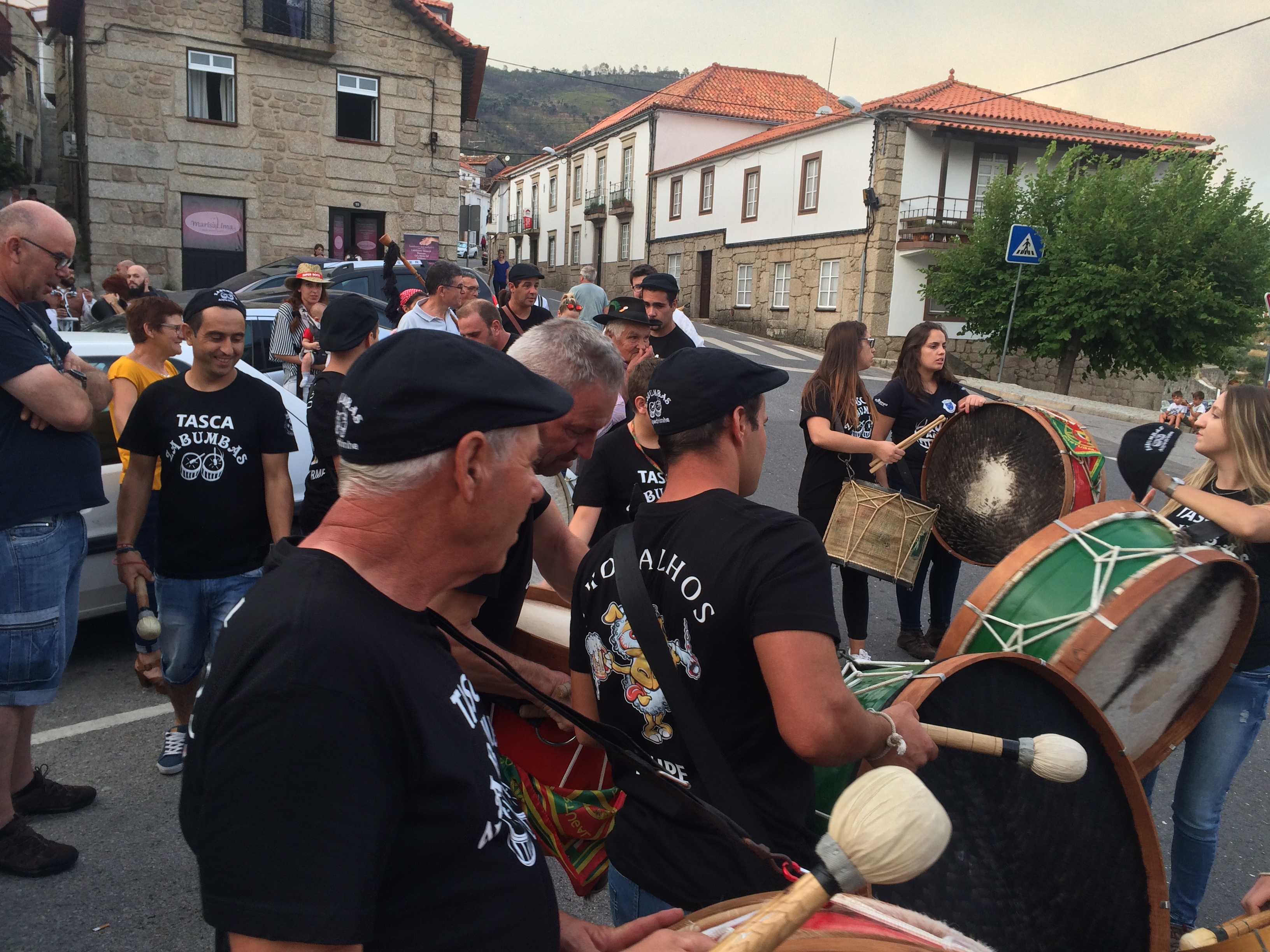 The second weekend every September there is a marvellous ‘festa’ held in the local village of Alpedrinha. It celebrates the return of the shepherds and their herds from the mountains. Themed around cheese, traditional music and the culture of the shepherds, the festival is attended by hundreds of people from near and far…

This year a mural was unveiled that commemorates Antonio Lopes senior who passed away and was a local character and founder of the festival. A traditional shepherd himself, he taught his son, Antonio, our friend the ways of the animals and the mountains… 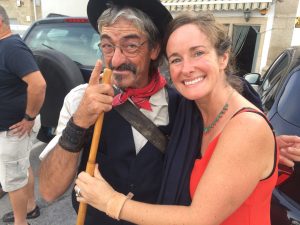 From Friday to Sunday the village was awash with people eating, singing, taking part in workshops and dancing too! Miriam and Catherine arrived back from walking in the Serra de Estrella just in time to enjoy the festivities. 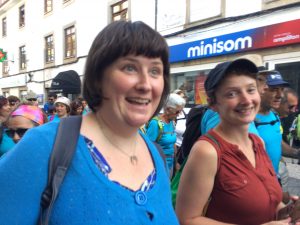 These lovely ladies came from Ireland to spend some time at Mount of Oaks relaxing and taking in some walks in the region – and we had such a great time together they are planning on returning again. Why did they like it some much – well what they said was that it was the atmosphere and the ‘craic’! 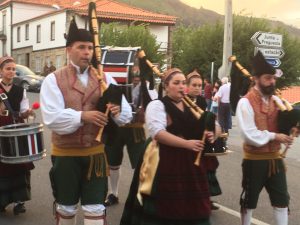 Every year the village twins with another region that also still produces cheese with traditional methods and has a practice of local costumes and instruments. This year it was Asturias in northern Spain. The image above is one of the bands that came down with their beautiful bagpipes and drums. 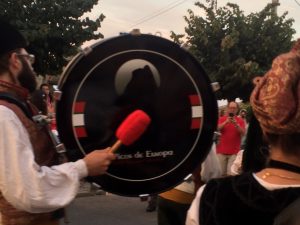 The spirits were high, and the cherry liquior was royally presented in edible chocolate cups! 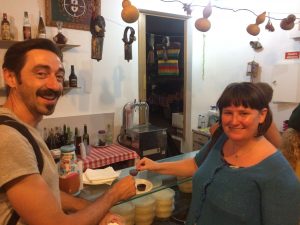 In the evening the streets were full of people moving to the music. 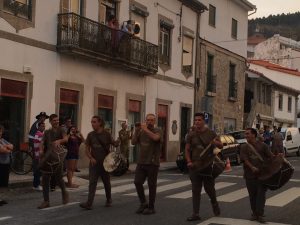 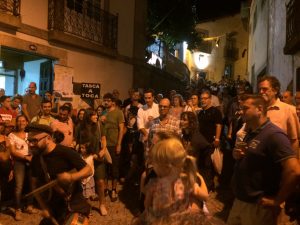 Samuel was carried mostly by Eric in his super duper backpack allowing the wee man an excellent view of the action.

Neighbours Tyra and Martine were producing a fresh sangria with their grapes and pears – oh it was delicious. Many others had little stalls selling their produce and drinks. A great opportunity to boost the local economy!

Friends Eva and Isik loved all the beautiful decorations inside the houses that had been converted into taverns or cafe’s. This snap doesnt convey clearly how beautiful this room looked! 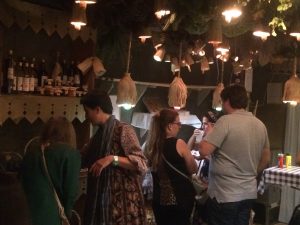 We even bumped into our fantastic neighbour Sr Aqulies and the marvellous Andrea and Manuel! Together we were blown away by the music of ‘O Gajo’. 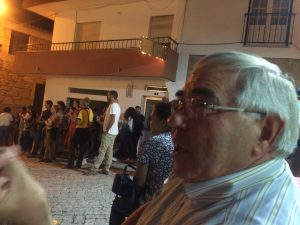 On the Sunday of the festa we have been taking part in the annual walk behind the sheep from Fundao to Alpedrinha. This year there were huge numbers of people, and groups who had come especially to take part in the unusual tradition. 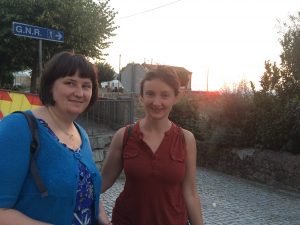 We saw the sunrise in Alpedrinha before getting a bus to Fundao….we were, me, Marcia, Sami, our saintly volunteer Alex, lovely Pia, plus Catherine and Miriam. And as it turned out too many to fit in the first bus! So Miriam, Catherine and I waited it out patiently on the side of the road until our lift arrived!

Arriving into Fundao we joined the others outside the town hall and waited for the sheep and shepherds to arrive. 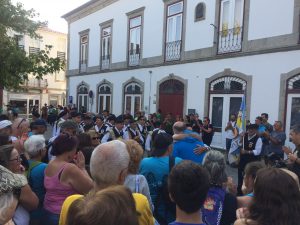 And then we set off…. 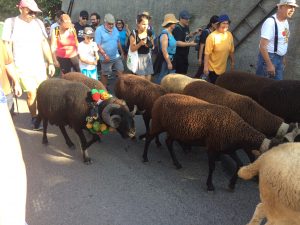 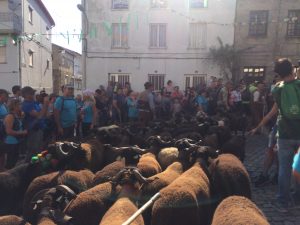 We had about 6 shepherds and a guy from the village on his horse accompanying the group. It was a lovely pace and gave the chance for me to walk along with Catherine and get to know this amazing lady a little more! 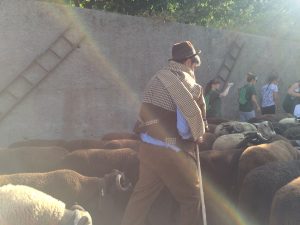 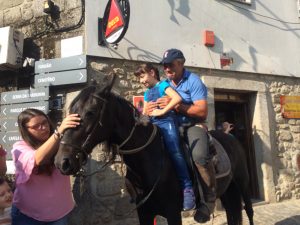 At the top of the mountain before we began to descend into Alpedrinha, we stopped for a break and snacks. Even though it was only 11am the wine was flowing into some eager mouths.. 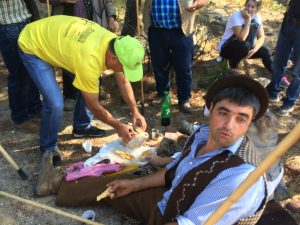 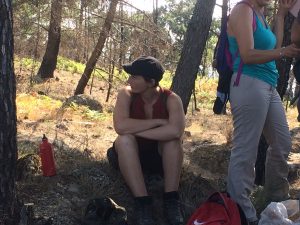 We arrived into the village where we were welcomed with the streets lined with well wishers. It was hot and so we celebrated the walk with a yummy lunch!

In order to get an idea of the walk from the perspective of one of the participants – check this little video. Or this video from one of the news stations that shows more about the festa and its other traditions – for example how the drums are made!

Other useful information in English cane be found here. 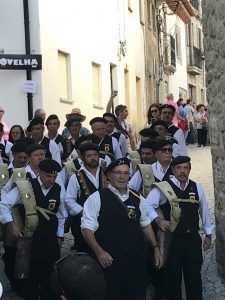 The festival of Chocalhos in our neighbouring village of Alpedrinha was again this year full of wonderful surprises.

From 15-17th Sept the village came alive with traditional music associated with the pastoral past and present.

People travelled from all over Portugal to enjoy the activities, food, music and dancing. 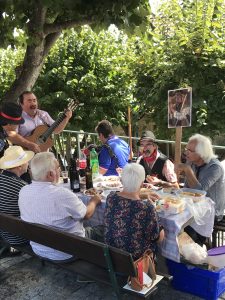 For the last number of years the Chocalhos, which celebrates the traditional shepherding ways in the region, has twinned with another region in Europe which still has strong links with sheep and goats. This year the region was Extremadura – so the Spanish over the border brought their delicious cheese and local products.

There was a beautiful family feeling in the village. With singing, people eating and chatting together and enjoying the beautiful weather. 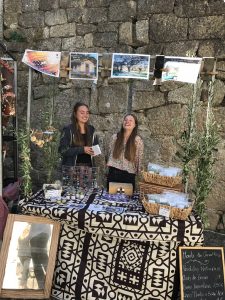 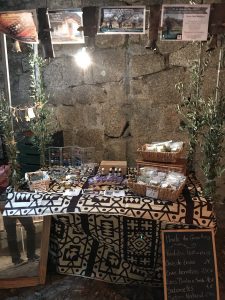 Our super team of volunteers, Kirsty (South Africa), Julia, Henrike and Thomas (Germany) along with Marica’s mum Camilla co-ordinated the stall for the duration of the weekend. Eric and Thomas stayed up until late and the girls did the day shifts!

One of the highlights for Eric of the weekend were the conversations that he had at the stall with Portuguese people who had come from the cities to visit the area. He encountered many from Lisbon and Porto who were delighted to experience as sense of community, celebration and simplicity on the streets of the village. 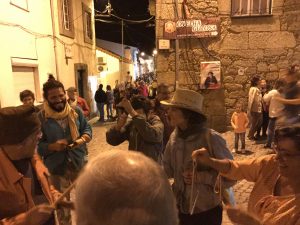 A group friends had travelled from Lisbon and Porto, organised by our friend Duarte, camped at the Mount of Oaks. They took part in the nightlife and the walk from Fundao to Alpedrinha with the sheep and shepherds on the Sunday.

Above is a picture of Duarte and friends as they were handed a few musical instruments and they gratefully created a tune! 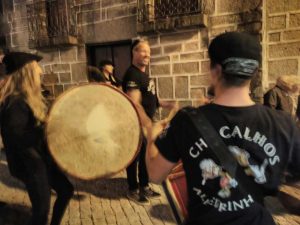 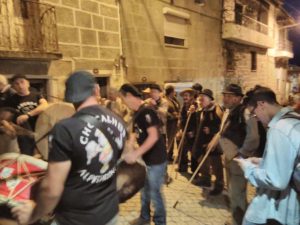 Friday and Saturday nights bands took to the street, at every corner of the tiny cobbled streets groups playing drums or bagpipes were found! It is hard not to dance to this music!!

In the week before Chocalhos we had the pleasure of hosting Nuno and Luisa from the Lisbon area – this amazing couple were on a camping holiday with us, and yet helped in many ways, for example tackling an area of brambles next to one of the stone walls.

On the Sunday there is typically a walk from Fundao to Alpedrinha along the old Roman road. People process after the sheep and shepherds. When they arrive in the village they are blessed by the local priest. Here they are arriving to the cheering of the onlookers! 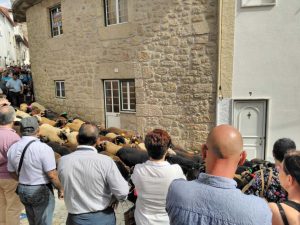 One of the low-lights this year was that there were less local people out in the celebration than normal. We put this down to the fact it was difficult for people from the area to celebrate when so much had been lost this year due to the fires in the mountain behind the village. There was a sadness too at one of the oldest shepherds, 91 1/2 year old Antonio Lopes from the village passing away, the father of Antonio Lopes, our dear friend.

However, despite the lower numbers for the festival in general, the Home Grown Market on the Sunday, after the sheep walk was VERY well attended – and a huge success. 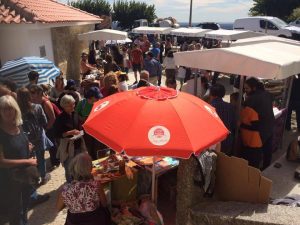 Many thanks for the success of this goes to Francisco from Ananda Marga – he has been working on the promotion of the local organic markets for months. This was the first to take place in the public space in Alpedrinha, after discussions with local producers and the local authorities.

We look forward to next year’s Chocalhos festival. If you would like to stay at Mount of Oaks for that weekend, remember – Chocalhos normally takes place the 3rd weekend of September every year. Options for associates are camping or booking the straw bale guest house.