On the third Sunday in January every year, the village of Povoa de Atalaia, walking distance from the Mount of Oaks, prepares to cook the maize porridge (papas de carolo) and receive hundreds of visitors.

This year, Eric, Marica, Samuel and I enjoyed the afternoon with the neighbours, basking in the sun!

So, what is the Festa das Papas about?

Everything began with a legend…..

According to the legend, a long time ago, there was a very serious plague of grasshoppers in the region. Everything farmers cultivated was eaten by the grasshoppers. The farmers asked Saint Sebastian to help them getting rid of those insects. They promised they would build a chapel in his honor and, yearly, each third Sunday of January, they would make a pilgrimage there. In this pilgrimage, farmers promised also they would distribute white maize porridge (papas de carolo) freely, as well as fritters, to all the local inhabitants.

After a mid afternoon mass in the main church in the village, the families who have the responsibility that year for sowing, growing and making the traditional maize porridge dish parade in front of the priest and the band to the chapel of St Sebastian. 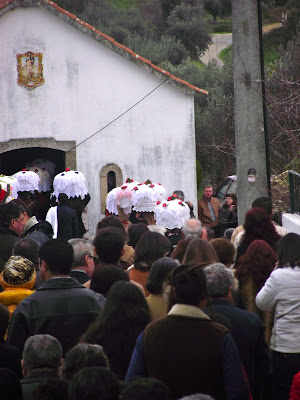 The ‘papas’ enter the chapel on the heads of the villagers and are blessed by the priest.  Then, they are distributed to all the people outside in a regal sort of fashion – it is a beautiful ritual and quite theatrical. The tradition reminds the village about the importance of sharing.

Here is what is looks like…..large squares of a porridge-like consistency. It is difficult to describe – but worth tasting!

Something else that the ladies make and offer as part of the ‘festa’ is a deep fried sweet, like a fritter – which I prefer more! 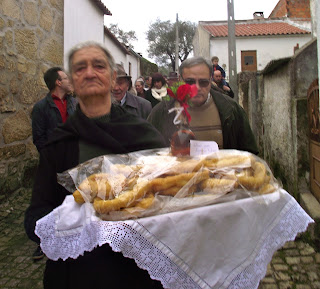 Our neighbour, Tia Adelina was delighted to hold Samuel during the festa. Samuel also loved the Papas!

If you read Portuguese, here is the link to an article about the Festa das Papas. The article is very informative about the history of the tradition.

There are more images in the 5 min long youtube video made by a few girls in the village for a school project. The music is traditional to the area and the video gives a real sense of the festa, and what it means to the locals. Click here to see the video.