How to condense all the wonderful happenings, visits, events and courses into one blog post?! Impossible to cover EVERYTHING – but here goes at a whistle stop attempt!

There is so much to give thanks for that took place in 2018. The year began with us finishing the major work to the kitchen.

The first family member to visit was Eric’s dad Jens.

January and Febuary we were concentrating on the kitchen and planning events for the Spring. But we did go and teach a day workshop on using permaculture in an urban context near Covilha.

Then we had the whole mixed ability group at the land for a forgaging, seed sowing and tree planting day!

Already in March we were out and about taking part in the local Eco-Markets – the first of these to happen in the public space was in Alpedrinha. Eric took a lead with these as the year went on and in total he attended 18 eco markets.

What is great about the markets is that they began to grow in popularity – another monthly market opened for BioEco in Covilha – and others in the region started, such as one in Penamacor, and even a market at a conference organised by Sementes Vivas in Idanha Velha.

We gave our first demonstration of how to make Sour Kraut at an Eco Market in Alpedrinha which was LOADS of fun!

and the next in Covilha at the Feira de Troca..

April saw the beginning of the open season. We began to host a weekly yoga practice with Laura. Had family in the form of Marcia’s mum Camilla to visit and Kirsty come volunteer for a month.

Kirsty and Ba made their project for the month the building of a palacial hen house for chickens we were given by Paula a neighbour who moved back to Scotland.

We had our Annual General Meeting for the White Stone association in mid April and it was really well attended by local people and we presented our ideas for the coming year and got useful feedback.

We had our opening event of the season – a Spring Gathering in April too. The preparations for this day were epic fun. We gathered in the village for a ‘chop and chat’ the day before, and a group of some of the bestest ladies in the areas showed up..

And then there was the actual Open Day….which was themed around making connections. It was a family and educational day with mini workshops, an open space type networking part and even a chance to make bug hotels!

May was the beginning of the flurry of guests and events. We had Jenny, Frank and little Iona come to stay and learn how to make a few fermented goodies. We also had Emit from California and Lauren from Canada here holidaying and helping.

Our first fermenting workshop of the year was in May and my mum was delighted to be here to attend. Marcia, Nicky Arnold (our dear friend and top lady!) and I were quite nervous at the start, but gently found our feet with the structure and layout of the workshop. The participants seemed to love it!

The other workshops this month were Marcia and Eric’s traditional soap making.

During the local Cheese festival in Soalheira we had a lovely Austrian couple come and stay in their camper van. We brought them along to a walk where we enjoyed the local countryside, visited sheep farms and ate yummy cheese!

Barbara taught her first building course of the year at Quinta da Fonte, and they were making a ‘tiny house’ as well as learning all the skills Ba teaches.

The rest of Eric’s family came at the end of May to enjoy time with Samuel and to celebrate his 2nd birthday.

In June the month began with a visit from dear friends Jayme and Jim from England – they are food people and so there was much fun cooking with fire outside the kitchen and long catch up chats.

We had Carly come in June and lead a course of Pilates in the common space. She since has set up courses in local village halls and her business is growing well!

For Summer solstice we walked silently to the top of the Gardunha’s and watched the sun rise and listened to errie pipes playing and welcome the mid point of the year.

More wonderful people arrived as the month went on…Isik and Craig from London, and then Lucy and Sue came on a mini retreat. Together we walked, collected fruits and foraged up the mountain, our chat spiced with politics, theology, and all other interesting subjects!

One of our volunteers Helen from Toteness came in June and stayed for most of the summer! She was great craic and loved to cook – so we were well taken care of!

In July we welcomed the return of Dearbhla, Ed, Holly and Jude to the area. Thanks to Martin and Tiddy they stayed comfortably at their place and we got the chance to hang out and cook together lots. Dearbhla expertly lead us through a workshop on ‘Seed Cycling’ on the new moon in July and the women present found it really useful.

We held a fun Summer Party in late July. Helen and Manuel were present to help and it was filled with dance, tunes, food and new connections. Click here for more snaps of the event!

Marcia and Eric ran another of their interactive soap making workshops in July and here is a blog post about it.

As it heated up in August, Barbara headed over to Keela for more natural building courses. These were really popular and so was the short course in natural plasters at the end of the month. More of these courses are planned for 2019 – news of these are coming in the coming weeks! 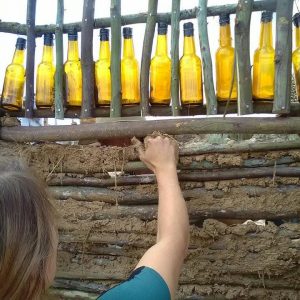 August was also home to Boom Festival and afterwards we had some guests from Germany who spend days here to rest before heading back to their lives! Our volunteers for August, Sami and Daniel had been working at the Boom and came ready to get their creative hands dirty in our forest….

Also in August we welcome Raquel, Jarlith (travelling to us after completing the Caminho de Santiago de Compostela), Sandra and Alex. We were so blessed with the gift of each of these beautiful folk – each so individual, unique and delightful.

The month of August ended with a personal highlight in the form of weekend Silent Retreat. We had brilliant people come and embrace the practice of silence for 3 days. We ate well thanks to Marcia and Sami, the sitting practices joyfully attended, and so were the mediation walks. We will host two more of these in 2019 – at the start of May and the end of August, both over the new moon. Drop a line if you want to already reserve your spot.

September we had more guests in the form of long term supporter of Mount of Oaks, Miriam and her friend Catherine.

They were followed by a couple also living in Belfast who decided to make our Straw Bale house their honeymoon destination!! Zainab and Paddy were here for a week and they happened to be here to enjoy the Autumn Equinox at a neighbouring project.

They were also here for the annual Chocalhos festa in Alpedrinha….

Here is a blog about it!

We hosted another of the Yoruk retreats in September with Eva and Isik. The theme for this creative residential was ‘Song of the Cave’ and you can read more about it here.

Before the group left, they had the chance to try some traditional shepherding – this post has more pictures…

Marcia, Eric and I went to Lisbon at the end of September for the first ‘Art of Hosting’ Training in Portugal in the Portuguese language! Yes, 3 day training only in Portuguese – Eric and I just about coped – and despite the frustration of sometimes not being able to express exactly what I wished, the experience was marvelous.

October began with a happy event – Barbara and I finally got legally married in Portugal and had a party to celebrate. Both our mum’s were present and we danced into the wee hours with friends.

Old friendships were a theme for the whole month as we welcomed the return of Juran and Ulli to celebrate 10 years since they got ‘married’ at the Mount of Oaks – accompanied on this trip with their 2 fab kids, Fiona and Alvin.

Ulli Butterfly celebrated her 40th birthday and had a beautiful party on the land. Ulli came for a whole month and we loved having her energy and creativity abounding! Whether she was dancing in the trees, harvesting flowers or fruit, leading us in worship or having a good chat – she was present and brought a lot of joy.

We had the volunteer help from Freddie, Mike and Quis in the run up to the Olive Harvest. These men were a massive help. Digging holes for the chestnut trees, taking back the mimosa or preparing wood piles – it was a blessing to have them here.

The first week of Mike’s time helping us he was accompanied by his wife Sarah. These two have been supporters of the Mount of Oaks, and one of their daughters since the start – so it was great to have them with us this Autumn.

In October Marica, Eric, Barbara and I began community meetings to speak about the vision and needs of the Mount of Oaks and us as individuals. The outcome of these heartfelt discussions was the decision that Marcia, Eric and Samuel would move on to find their own place to live and work in early 2019.

November saw us host the final soap making and fermenting workshops of the year.

We also harvested all the olives which was SUPER fast and fun this year! The team consisted of us 4, (Barbara going ahead and doing a first prune) Mike, Quis, Hajo, Freddie, Tobias and Russ! Dream Team!

At the end of November we threw an end of year closing party – it was there that Eric shared their news of moving on. After 4 years of living together, we are all of the same heart – this is a good time to begin new chapters and adventures!

Visits in November also included a return for Hajo – and he saw great changes in the place since his last visit. He brought with him Sasha. Together we plotted about a possible retreat in September 2019 focused on rituals for processing grief. More of this to come… When Mike came for 6 super weeks, he drove from Northern Ireland towing a foldable caravan….it was amazing to see him take it down!

His was a planned visit – we had many unplanned visits too – like for example from a couple, Hilde and Oscar traveling from Holland, all around Europe collecting little videos about places that are ‘Finding a better way to live’.

It was a fantastic year – busy, we tried lots of new things and learned important lessons. We experimented and had lots of laughs and shared hugs and tears with many folk. We had frustrating moments, but on the whole, it was another super productive year and one we can celebrate for gifts of friendships renewed and new ones begun.

More news on courses, retreats and info on volunteering to come! For, now, many many blessings from here to wherever you are.